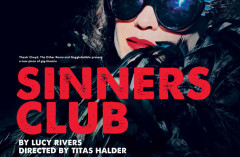 Sinners Club by Lucy Rivers is an expertly judged, passionate piece of gig-theatre.

The premise behind the show is simple: a feisty rock and roll band called The Bad Mothers – played by Lucy Rivers, Paolo Adamo, Dan Messore and Aiden Thorn – record their new album live.

Every number in the album is inspired by Ruth Ellis, the last woman to be hanged in Britain. Ellis gained her title for murdering her lover David Blakely in an act of passion and revenge. Sinners Club is an atmospheric show bursting with unrivalled energy, which aims to evoke this sense of passion. It does not disappoint. Set in the intimate Soho Theatre’s Upstairs space, the audience are invited to clap along, sing, (and at times, play the triangle!) as The Bad Mothers take us on a journey of melodic storytelling.

Director Titas Halder walks the line between the past and the present although ultimately, Sinners Club desperately wants to draw attention to the now. Flashes of audience participation and humorous dialogue between technical staff and the performers keep us present and engaged. Alongside this, video projection and narration are used to tell us Ruth Ellis’ story.

Despite this, I found myself craving more immediacy. For a performance delving into sex, drugs and rock and roll, it could have stood to make its audience a little more uncomfortable and to push the concept of live recording further. What happens if the audience aren’t led to comfortable theatre seats but instead are forced to find somewhere to sit in the nooks and crannies of the intimate playing space? What would happen if the audience are asked to stand – much like music lovers at a gig? (Soho Theatre would likely get a lot of complaints, but you see where I’m coming from…)

Rivers is a phenomenal performer; I hung onto every word she spoke (and sung, and screamed), almost forgetting about the men onstage. Rivers’ character is a cross between a studio musician and Ellis herself. At times Rivers invokes the spirit of every woman scorned. Although physically dwarfed by the male musicians, Rivers’ stage presence is enough to keep our attention solely on her. And whilst a clear relationship developed between Rivers and one of the bass guitarists (Dan Messore), the characters felt like parts of a jigsaw piece that never truly fit together, insofar as narrative was concerned. Other parts of this jigsaw piece include ‘David’, the band’s grumpy music manager, who never appears onstage but whose standoffish demeanour is clearly a dig at Ruth Ellis’ lover of the same name.

Sinners Club asks us: Why did Ruth Ellis shoot her lover/ What does this woman gain (or lose) by killing the man who screwed her over? Rivers changes from corsets and fishnet stockings to wearing a thick cloak and headpiece that makes her at once regal and terrifying. With this, set designer Mark Bailey, cleverly calls us to question the notion of the female villain; the observation that powerful women of the past are often simultaneously painted as villains or psychopaths. Overall, Sinners Club was like a 90 minute Cell Block Tango, only grungier and with more self-awareness. 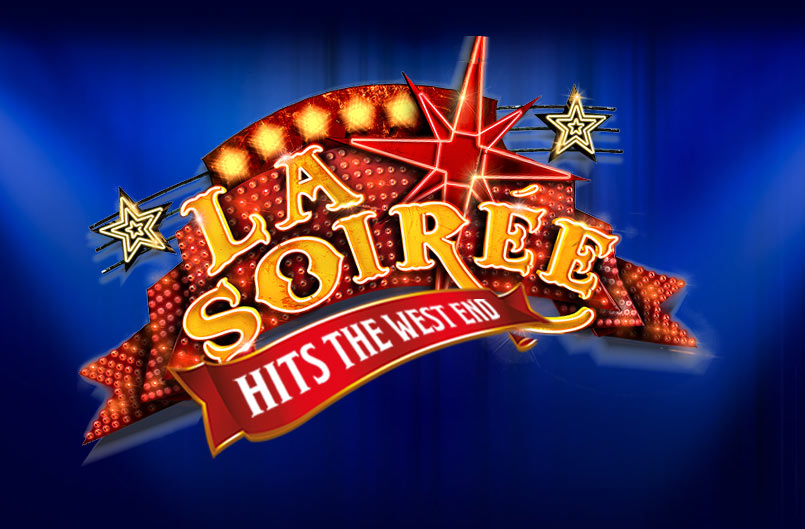 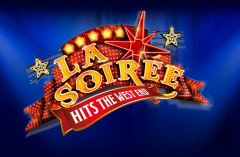 Bursting back to London this Festive Season, La Soiree has a new home at the Aldwych Theatre, with a selection of brand new international and home grown performers all ready to entertain. Like a cheeky Christmas stocking, full of surprises, this heady mix of cabaret, circus and comedy acts is sure to have something for everyone.