Review: THE TAMING OF THE SHREW at The Barbican Theatre, London 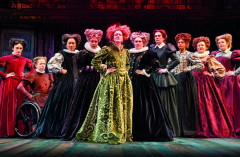 Shakespeare’s problematic play THE TAMING OF THE SHREW is given a new “revised” production by the Royal Shakespeare Company, in their old London home after performances in Stratford earlier this year. It still remains a problematic play and even more confusing for anyone not familiar with the original play in this “revised” version.

The practice of gender swapping in some recent productions has reached its pinnacle with this production with the wholesale swapping of the genders in all the main roles. Justine Audibert directed and perhaps adapted the play. Whilst such practice works brilliantly for some productions, such as the Donmar’s MEASURE FOR MEASURE and The Bridge Theatre’s A MIDSUMMER NIGHT’S DREAM, it does not for others such as the current RSC’s AS YOU LIKE IT. This production falls into the latter group.

In this production all the main characters switch genders but retain their original dialogue. Katherine also known as Kate is now a man with a woman’s name. Petruchio is now a woman called Petruchia. This might have worked if only the two main characters’ genders are switched. By switching everybody’s genders, it created more confusions and incredulity.

It is just not credible or natural to hear Shakespeare’s “masculine” words and sentiments being spoken and delivered by high-pitched feminine voices and vice versa. In fact, the changing of the pronoun to accommodate the switches upsets Shakespeare’s rhythm in his writing. Furthermore, in order for the actors to delivery the switched dialogue they all have to resort to exaggerated over acting.

The women are still women dressed in women’s clothing but have to delivery and poise “masculine” words and sentiments, and vice versa for the men, This leads to acting almost to the level of Pantomime, with “thigh slapping” for the women and mincing for the men.

The confusion permeates the entire evening. I was constantly being distracted by having to think, consider and place the context of the dialogue as written by Shakespeare and their justification in this production, instead of enjoying Shakespeare’s masterwork and the actor’s acting. I understand that perhaps one problematic speech in particular is the reason for this “revision”. However, the person who made the revisions missed a trick. Shakespeare’s rhythm could have been retained if they started the said speech with, “I am ashamed that “we, Men” are so simple…”, instead they started it with, “I am ashamed that Men are so simple…”, thereby upsetting Shakespeare’s rhythm.

In this production, a widow named Baptista (Amanda Harris) has two sons, one Katherine/Kate (Joseph Arkley) is wild and violent and the other Bianco (James Cooney) is vain and promiscuous. Baptista is desperate to marry off Katherine to be rid of his destructive violence around the house. She tells Bianco that he will have to wait till after Katherine is married. Bianco has three suitors, Hortensia (Amelia Donkor), Gremia (Sophie Stanton) and Lucenta (Emily Johnstone). Petruchia (Claire Price) a bullying strong woman takes on a bet that she can tame Kate and marry him, she manages to tame and marry Kate. Bianco marries Lucenta. As with all Shakespeare plays there are mistaken identities and subplot intrigues and they are indeed very funny.

It is unfair and difficult to judge and appreciate the actor’s performances because they had to exaggerate and over act given that they have to deliver sentiments and speak dialogue that are alien to their being. Even so, their professionalism is evident on the stage. The direction by Justin Audibert is gimmicky but unobtrusive. The music by Ruth Chan is contemporary and retains an Elizabethan essence.

Whilst it is very gratifying to see a production of a Shakespeare play that is beautifully costumed in the correct period, it does not compensate for the misguided idea and confusion that it generates. Let’s hope that this gender swapping practice is not going to be prevalent in future productions of the great classic plays.

The Taming of the Shrew 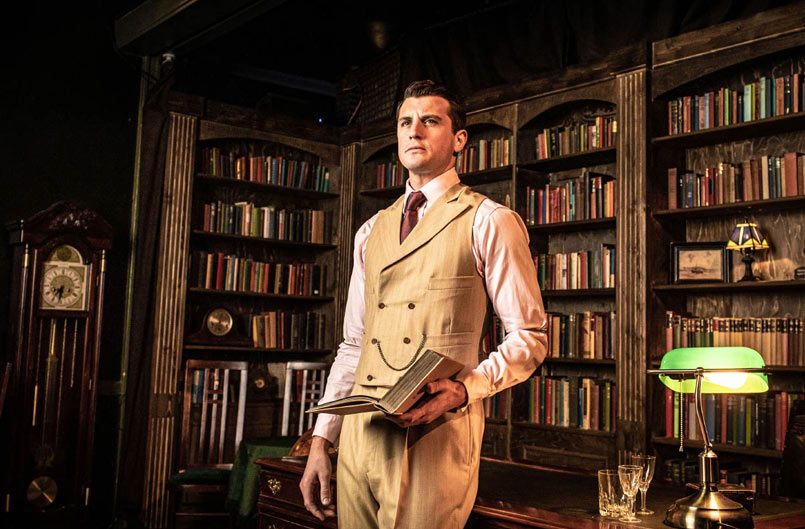 Review: THE GREAT GATSBY at The Immersive LDN, London 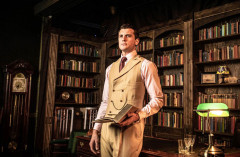 The theme song is “Ain’t We Got Fun?” in this 1920’s immersive experience of THE GREAT GATSBY and his friends. And Fun is certainly the order of the day.