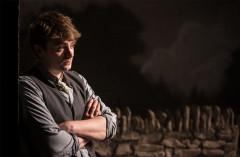 I like to try and keep up with careers of the actors I direct and recently noticed a new you tube channel from Zac Hamilton Wancke which promotes striking new versions of musical theatre related material.

I cast Zac in his first role after drama school, as the male lead in PRINCESS IDA, and subsequently directed him in a rock musical of CRIME AND PUNISHMENT.  Recently I’d heard that he’d gone on as Jean Valjean in the UK tour of LES MISERABLES so I was keen to catch up with him to discover more about his YouTube content and how theatre had been treating him.

P: I haven’t seen you for a few years. What have you been up to?

Z: Since CRIME & PUNISHMENT I've spent a lot of time on the move - I did a few short plays and short films directly after (even writing and directing my very own short comedy!) Then went on tour of Europe with a concert of Andrew Lloyd Webber and then LES MISERABLES so I've not had very much time in one place! Now with lockdown at our feet I've been working very hard playing songs from musicals on a dedicated YouTube channel!

P: Before we come on to that, how was leading the LES MIS company in such a seminal and demanding part.

Z: Going on for Valjean was an indescribable feeling. I can never quite explain the feeling of playing through that man's life. I couldn't have been happier to play that role of a lifetime!

P; So what’s the thinking behind the recordings you’ve been making recently?

Z: To cover musicals in new and interesting ways. I upload musical theatre songs every Friday working with different singers, actors and musicians! But I also want to make musical theatre more accessible for people, there are lots of people who love musicals for whom it is unaffordable or even impossible to attend musicals regularly so a YouTube channel with your favourite showtunes on seems like a good step.

P: You have an amazing vocal range which you show off to great effect in this project. How low and high can you go!?

Z: Thank you! I think my range starts at the lowest note of E2 and my full voice goes up to C#5. My mix and head voice then extends to F5 . My experience has been when reaching for higher notes where there’s a will there’s a way.

It has taken me some time to build up strength and appropriate muscles, and sometimes I have discovered I just needed a different placement or approach.

I have a wonderful signing teacher called Will Lester who has taught me for 7 years and he always helps push me in the right direction!

P: How do you choose the songs you’re going to cover?

Z: I am constantly listening to music, like, really nonstop. So sometimes I find a playlist on spotify for showtunes (or more recently I've been asking on Instagram about people's favourite shows) and it basically comes down to whether or not I think I have an idea for it, both in sounds and visuals. Do I think I can make this sounds good? Do I think I can make this look good. Friends and family often suggest ideas some of which have become videos!

P: Are there any songs or types of song that you wouldn’t tackle?

Z: There really are no songs that won't work by their nature. There's a chance that something I can't see a way into today might become just the thing tomorrow!

P: Talk us through how each video is made. How long does it take to go from the initial idea to presenting the completed piece on YouTube.

Z: The process so far can take anything between one day and 6 months. I mostly aim to have a video done and dusted in a working week but when I started I had never really used recording equipment or mixing software or video editing software so my first few ideas took a lot longer because I didn't know what I was looking at half of the time.

I aim to arrange the song and put a rough recording down on day 1.

Day 2: I will fill out the parts, make sure it's all working to the click track, add any nice motifs I'm keen on and possibly send it to whomsoever might be recording with me (other singers and musicians).

Day 3: Could very possibly be a filming day or a mixing day or more than likely both. This gives me two days to clean up the mix and work on editing the footage.

This is all good in theory but the reality is that I'm usually working on around 6 videos at any given time which allows for things beyond my control. It's raining and I need to film outside? Guess I'll arrange next weeks song. Camera battery is dead again? Guess I'll go edit the video that's not out for a month. Mostly the filming slows me down. I'm still learning.

P: How do you envisage the theatre industry after Covid-19?

Z: Well, there are myriad factors to draw from, theatre always takes a hit in any recession, people may feel less sound surrounded by crowds over the coming years, tourism is a big part of our theatre economy and culture and travel may be greatly affected for some time. But my feeling is optimistic.

I think that people still really love theatre. People have had Netflix for around 10 years, DVDs, VHS and live telly for even longer and yet we're still here! Nothing contends with live shows today and I'm not sure anything ever will.

And even in the worst case scenario where every West End, regional and fringe theatre close their doors, I have a feeling someone will step into the street, recite some sonnets, deliver a scene or play a song and people will gather around to watch.