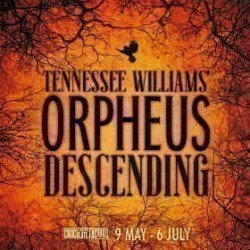 In 1959 a movie of Tennessee Williams' Orpheus Descending, starring Marlon Brando and Anna Magnani, was released, called The Fugitive Kind and directed by Sidney Lumet. A later iteration on Broadway in 1989, directed by Peter Hall and starring Vanessa Redgrave and Kevin Anderson, proved a much bigger hit. The movie Orpheus Descending, a screen adaptation of the Peter Hall stage production, came out in 1990, again starring Redgrave, and there was also a 1994 two-act opera version by Bruce Saylor and J. D. McClatchy. Now it's playing in London, a fantastic modern production of the Williams classic that becomes more relevant as time goes by.

This is actually a contemporary version of the story of the ancient Greek legend of Orpheus, dealing with the extraordinary power of passion, art and the human imagination, and how they make life worth living. The action takes place in a hardware shop in a little southern US town, a place where conformity, sexual frustration, narrow mindedness and racism are ever-present.

The plot? Lady is trapped in a loveless marriage to a dying husband, bored to death of small town life and sick to death of intolerant people. When the wild-eyed drifter Val turns up, she senses a new life rich in passion... and everything changes. Val is a rebellious young man with a guitar, a snakeskin jacket, and a dodgy past. His erotic energy and strong appeal is obvious and when he starts work in the shop, the middle-aged owner Lady uncovers hidden passions of her own. She's hopelessly attracted to Val and the possibilities he seems to offer, and the play examines the awakening of her passion. As you might imagine, the affair has tragic consequences for both of them.

Orpheus has passion at its steamy heart, examining its repression in the most remarkable way. We humans can only be truly happy, after all, when we live bravely and honestly and are true to ourselves. You'll revel in the lush dialogue, which has more than a mere element of poetry to it and supports the action perfectly. It is indeed a classic.

Who is this show for?
This show is recommended for people aged 13 and above.

Reflects the Deep American South as it is even today

Despite the 1 star review that I read, and the comment that it is a strange play, I felt that it was excellent and that it was not at all strange. It reflected the Deep South of the US, even by today's standards (and increasingly so under Donald Trump). The acting was great, the costumes appropriate to the time and place, the southern American accents quite good.

Powerful and pent up angst

Reviewed on 11 May 2019 by Sue, Beaconsfield, United Kingdom