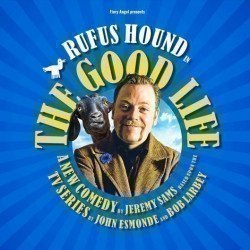 About The Good Life

Well, they’re back – and on stage for the first time starring award winning actor, presenter and comedian Rufus Hound in The Good Life, a theatre reimagining of the TV sitcom that delighted countless millions in the 1970s.

Jeremy Sams’s comedy leads the well-loved characters (not forgetting Geraldine the goat) through uproarious adventures, some old, some new and often (even today) hilariously familiar.

This new play celebrates a time when, whatever our differences, we still managed to get on with our neighbours.

Rufus Hound's extensive list of stage credits include the original West End production of Dirty Rotten Scoundrels, One Man Two Guvnors, The Wind In The Willows at London's Palladium and Everybody's Talking About Jamie. Jeremy Sams's directing credits include the National Theatre's West End and Broadway revival of Noises Off, the West End musical Spend, Spend, Spend, the international tour of The Sound of Music and Oklahoma! at Chichester Festival Theatre.

There are no special offers available at the moment but we still have great ticket prices for The Good Life at the London Theatre to be announced.