Now showing at the Vaudeville Theatre

4.9/5 - based on 85 reviews - (Read reviews) 4.9 85 reviews Tickets from £20.50
Families (81%) Couples (92%) Theatregoers (95%) i
It's on at the Vaudeville theatre. It's a quirky musical that has delighted thousands on a recent tour, and now it's due to thrill even more of us! The music, lyrics and book are by Toby Marlow and Lucy Moss, and it's a dazzler of a show. Welcome to Six, the most unexpected, deliciously bold celebration of girl power ever... starring King Henry 8th's six wives. What an extraordinary, fascinating show!
Show info Book tickets
SIX tickets

Disabled theatregoers and their carers can get discount tickets. Please phone the Vaudeville Theatre access line on 033 0333 4815. 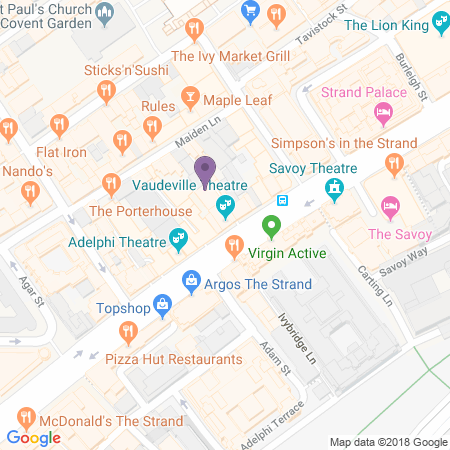 The Vaudeville is as pretty inside as it is from the outside, a pure white rectangle filled with ornate gold patterning, a luscious burgundy ceiling with a gorgeous sunburner and a classically elegant Georgian feel.

The theatre was designed by the architect C. J. Phipps, who designed several theatres of the time, was decorated by George Gordon and opened with an Andrew Halliday comedy, For Love Or Money, plus a popular burlesque called Don Carlos.

The 1870 frontage of the current building wasn’t anywhere near as impressive as it is now, being made up from two very plain house fronts. But two decades later the theatre’s owners invested in a grand new façade and also updated the interior, adding a beautiful new ceiling and cutting the seating down from a cramped 1,000 to a comfy 740, only to sell to the Gatti family a year later.

Early on the theatre mostly staged popular comedies and revues, and it was owned by the Gattis for an impressive 77 years. In 1925 they knocked down the traditional horseshoe-shaped interior and created a more practical, rectangular space and reducing the seating by another 100.

Covent Garden was about to be refurbished in 1968 by the GLC, and the theatre was threatened along with the Adelphi Theatre, Garrick Theatre, Lyceum Theatre and the Duchess Theatre, all nearby. Thankfully a powerful campaign by the actors’ union Equity, the Musicians' Union and the owners of the buildings – the Save London Theatres Campaign – saw the proposed project shelved for good and the Vaudeville was saved.

In 1969 the Gatti family finally sold their interest in the theatre to Sir Peter Saunders, who commissioned Peter Rice to re-do the interior completely in 1970. The building was Grade 2 listed by English Heritage in 1972.

In 2003 the theatre was bought by Max Weitzenhoffer , and it was brought under the umbrella of Nimax Theatres Limited in 2005.

Past shows at the Vaudeville Theatre

The hit musical Salad Days graced the Vaudeville Theatre’s stage in the 1950s, with a record-breaking 2,288 performances and a 1996 revival starring Kit and The Widow. Jean Fergusson's She Knows You Know was nominated for a Laurence Olivier Award in 1998 and, also in ’98, Kat and the Kings won Oliviers for Best New Musical and Best Actor in a Musical. In 2001 the Ray Cooney farce Caught in the Net enjoyed a run of ten months. Stomp was in residence from 2002 to ‘07.

We’re your premier destination for a wide variety of seat types and prices, with excellent availability on the full range of Vaudeville Theatre tickets.