About Guys and Dolls

Join us for Guys & Dolls as The Bridge transforms for one of the greatest musicals of all time. It has more hit songs, more laughs and more romance than any show ever written.

The seating is wrapped around the action while the immersive tickets transport you to the streets of Manhattan and the bars of Havana in the unlikeliest of love stories.

In A Midsummer Night’s Dream, you raved with us in the forest. In Julius Caesar, you ran wild with us as the mob. Now join us on Broadway for the biggest party yet.

Can I take my bag into the theatre?

For the safety and comfort of all audience members, rucksacks and large bags (bigger than a small over-the-shoulder handbag or messenger bag) will not be permitted into the auditorium. Our cloakroom will be open to check in bags.

If you have a standing ticket for Guys & Dolls rucksacks and large bags (bigger than a small over-the-shoulder handbag or messenger bag) will not be permitted into the auditorium, for the safety and comfort of all audience members. Our cloakroom will be open to check in bags and we recommend arriving at least 45 minutes ahead of the show start time to allow time to drop off your bag.

There are no special offers available at the moment but we still have great ticket prices for Guys and Dolls at The Bridge Theatre.

Brilliant - my first ever! I am hooked!

We thought the story was a bit weak but the acting costumes performances were amazing. Just not our thing sorry

i may say must see but it is definitely better to see.

Not for the younger generations

Thought the second half was much better than the first. Would not recommend it to anyone, but my father in his 80's loved it. Thought the ice cream system was excellent at the interval .

Even if you don't know many of the music/songs played the story is excellent.

Loved the show. Funny and some amazing singing voices

Heartwarming - you leave with a smiling heart

Absolutely loved this show. The cast clearly enjoyed themselves and that enjoyment transferred itself to the audience. It was funny, touching, serious, all together in one go as you would expect from Guys and Dolls. Guys and Dolls and Sit Down You're Rocking the Boat were showstoppers. Particular mention to Sophie Thompson who was wonderful as Miss Adelaide and how do you not fall in love with Jamie Parker's Sky Masterson. Big Jule was played by Max Parker in this performance and what a lovely job he made of it. Wonderful rendition of Sit Down by Gavin Spokes . I want to see it again - I wanted to the minute I walked out of the theatre with my heart smiling and singing.

Reviewed on 05 February 2016 by Caryl, Stike On Trent, United Kingdom

An enjoyable evening out

One of the greats

I have not seen Guy's and Doll's since a school production back in 2005 - but oh did this rendition live up to it tenfold!! The story was great, the actors were wittty, the lightening was brilliant ... but the musical numbers were truly exceptional. Miss Adelaide (Sophie Thompson) and Nathan Detroit (David Haig) were amazing, their chemistry was red hot, demonstrated perfectly in 'Sue Me.' Sky Masterston (Jamie Parker) was also portrayed very colourfully, especially in 'Luck be a Lady,' where the energy was tangible. My only slight hesitation was with Siubhan Harrison's portrayal of Sarah Brown. Although I thought characteristically she was pretty accurate, I found her singing a little too 'regal' for such a glitzy and truly American show. My final mention goes to Gavin Spokes who played Nicely-Nicely Johnson, as he took the win in the musical numbers with 'Rock the boat', the applause was electric and more than double that of any of song. However, if you're looking for a fun night out with some well known tunes, look no further as Guy's and Doll's is a definite must see.

Enjoyable show which 'warmed up' in the second half. Impressive performances by David Haig and Sophie Thompson. I have in the past always enjoyed watching David Haig when he occasionally appeared on TV but this was the first time I had actually seen him live on-stage and I was particularly impressed by his performance!

Superb show. Lively, colourful, fast-moving production. The cast was tremendous, with outstanding voice quality, clarity and diction. One of the best shows I've seen. I have absolutely no hesitation in recommending it.

Our seats were just what we expected following our booking. The show was wonderfully put together, dancing outstanding, great acting and singing in particular from Nicely Nicely Johnson. Jaime Parkers singing was spot on and David Haig and Sophie Thompson did great justice to their roles. A thoroughly enjoyable 3 hours of toe tapping theatre.

Feelgood, fun outing for anyone

Wonderful fun show with lots of familiar songs! A great evening out for all the family

Guys & Dolls a Must See

We enjoyed the show from start to finish, staging, singing, dancing, orchestra and cast all top class. Came out with a 'song in our hearts'. A wonderful way to begin the Christmas holiday.

Meet the New Guys and Dolls 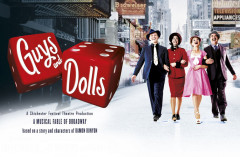 Who’d have thought that this season’s smash hit musical would be a show that’s nearly half a century old!

GUYS AND DOLLS which many people, including me, consider one of the greatest musicals ever written, has been constantly revived all over the world in major, community and school productions ever since its Broadway première in 1950.

Meet the New Guys and Dolls

Collect your tickets from The Bridge Theatre for free or get them posted to your address. 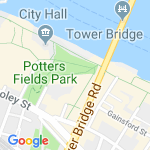 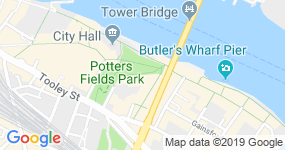