Review: THE LAST FIVE YEARS at the Garrick Theatre 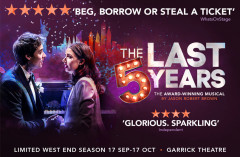 I believe Jason Robert Brown (JRB) to be the natural heir to George Gershwin, Leonard Bernstein and Stephen Sondheim. I met him in 1995 when he was recommended by the legendary Broadway producer Hal Prince, as an audition pianist. I hardly heard the singers as they were accompanied by such genius. Consequently, I saw the original production of the musical he had written, The Last Five Years very soon after it opened and was dazzled by the concept, the writing, the performances and the production.

Simply, it is the two-handed story of a love affair – a marriage – based on JRB's own failed first marriage. But with the unique concept of the man’s story (Jamie) going from the beginning of the relationship and travelling through to marriage, infidelity, and divorce, while the woman’s story (Cathy) begins at the end of the relationship and ends on the couple’s first date.

The Last Five Years is a show about opposites and JRB fiercely protects this. Over the years I understand that he and/or his publishers have forbidden productions when directors have attempted to show the two relationships going in the same direction – both starting at the beginning of the relationship and ending at the end. Or both starting at the end and ending at the beginning à la Stephen Sondheim's musical Merrily We Roll Along. JRB and/or his publishers have also forbidden same sex productions. In other words, the author knows what he likes and fiercely protects it.

It is a show about opposite characters – a Jewish man (originally played by the dark and brooding Norbert Leo Butz); and a non-Jewish girl (originally played by the sunny blonde Lauren Kennedy, the Nellie Forbush of Trevor Nunn’s South Pacific at the National Theatre). At the Garrick Theatre, although Molly Lynch (Cathy) is a wonderful performer, she looks as if she belongs to the same faith as her boyfriend; she was a splendid Chava in Fiddler on The Roof at the Grange Park Opera. This is definitely not what JRB has in mind. His Cathy was to be blonde and vivacious – the polar opposite of the serious and dark Jamie, aka JRB. Hence the lyric of the second song, Shiksa Goddess. As the man, Oli Higginson is extremely handsome, it stretches belief that his Jamie would be unsuccessful in romance. Never the less both Higginson and Lynch give 100% and the audience hung on to their every word.

The music of Jason Robert Brown is known to be fiendishly complex but Leo Munby steers the band and actors through it triumphantly, aided by the sound design of Adam Fisher – JRB would certainly approve.

The director (the hugely talented Jonathan O’Boyle) particularly scores when he helps the audience to understand what is going on by adding a focus on the wedding ring; who wears it, when. And where does it start, and where does it finish.

Less successfully he has opted for his Jamie and Cathy to also play a shiny black grand piano in the centre of the stage. So immediately the underlying story is diminished, while the audience are admiring the musicianship of the actors. This concept is also somewhat spoiled when the orchestra is revealed and the musical director is playing a very similar piano part.

There's also no attempt to tell the story by changing the set – a magnificent glossy affair by Lee Newby with terrific lighting by Jamie Platt. We could be on the set of any ITV game show.

So perhaps this should have been sold as The Last Five Years in Concert allowing the audience to simply take each of the virtuoso songs as a perfect marriage of words and music without the burden of trying to follow a narrative. At the end of the evening, two sets of my friends, also in attendance, hadn't followed what the story was about.

But they had had the best time. As had the rest of the very young West End audience with an average age of, I'd say, 27, who stood and cheered this production of The Last Five Years to the rafters. Deservedly so.

Finally, a special shout-out to Katy Lipson and her co-producers who have created and revived this production of The Last Five Years throughout the year of Covid. She, and they, are an example of what brilliance may be achieved in adversity. Thank you.