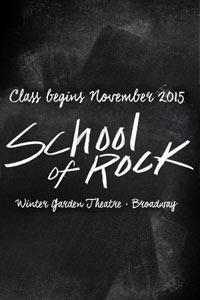 A brand new stage musical adaptation of the 2003 Jack Black film School of Rock will premiere in New York at the end of this year.

The musical is a collaboration between composer Andrew Lloyd Webber, lyricist Glenn Slater and Downton Abbey writer Julian Fellowes. The production is scheduled to open at the massive Winter Garden Theatre (about to become the home of the Royal Shakespeare Company’s double bill transfer of Wolf Hall and Bring Up The Bodies) on 6 December 2015.

Directed by Laurence Connor, the man behind the re-imagined productions of Les Miserables and Miss Saigon, School of Rock – The Musical is based around wannabe rock star Dewey Finn (played by Jack Black in the film version), who cons his way into becoming a substitute teacher for an American fifth-grade class. Dewey then goes about creating a rock band from the children under his care and enlists the group in a Battle of the Bands.

Glenn Slater and Andrew Lloyd Webber are no strangers to creating a new musical together; their last collaboration was the sequel to The Phantom of the Opera, Love Never Dies. This found little success with the public or the critics, let's hope they don’t make the same mistakes again!

The last time Lloyd Webber opened a show over the pond, it was the 1971 smash-hit musical Jesus Christ Superstar. Only time will tell if School of Rock – The Musical can find the same public and critical success.