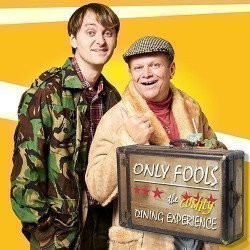 About Only Fools, The (cushty) Dining Experience 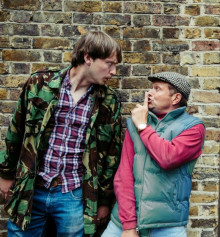 It’s the show you’ve all been asking for – and it’s brought to you by the people behind the worldwide smash hit, Faulty Towers The Dining Experience.

This fully immersive show transports audiences to The Nags Head to meet the pride of Peckham in a night of wheeling, dealing and eating.

The fun starts from the moment you join the Trotters and their friends for a knees-up. Meanwhile, they try to drum up some cash and make a cheeky saving on the side. But why is the pub closed on the busiest night of the week? There’s money to be made and debts to be paid!

A t’riffic night out with some cushty pub grub, this is a night you won’t forget – and you’d be a plonker to miss it!

Brilliantly funny, Only Fools The (cushty) Dining Experience is a wholly original immersive theatre show created in loving tribute to the BBC’s Only Fools & Horses TV series. All tickets include a 3-course meal.

Show was brilliant, roaring with laughter. Food was great

We had a really enjoyable evening, the character that played del and uncle albert were oustanding. The other characters were very good too. The food was good , however let down by table arrangement which wasnt mentioned when booked.

Funny and good value for money

We went for a friends birthday and Loved iit. £50 for a 3 Course Meal and. Fabulous entertainment. Best deal in London

Lots of laughter and audience participation. Food was great. Over priced drinks though.

A great interactive show. All the actors did a brilliant job of recreating everything that was so great about the original comedy. Food was good,not cordon bleur but would rival anything served up at the Nags Head. Definitely worth a visit.

Excellent night out. Fully interactive show and the actors take time to go round all the tables and so make you feel fully involved. Good meal to compliment the entertainment.

This has been the best interactive experience I’ve ever had, so many belly laughs from start to finish. I could not criticise a single thing ... Thank you so so much for a bloody brilliant show x

Absolutely amazing show, i would 100% recommend it. The actors, the storylines, the interaction was all 5*. I will 100% be going back.

OMG I have never laugh so much in my life it was great, fantastic evening was had by all.

You would be a right plonker if you miss this! Relive TV’s Best Loved Comedy For a Unique Interactive Evening of Food & Entertainment – Terrific Value For Friends & Family of All Ages.

For a change it was the overwhelmingly positive reviews about this event, that was very much the deciding factor to book for myself and four lovely friends Jacqui Mario Hannah & Paul. From the get go we had a total blast of an evening. I wanted an evening out that could take us away from the dreaded B word Co2 & Extinction. This event brilliantly put together is the perfect tonic, LAUGHTER all the way. So! "Pack Up Your Troubles in Your Old Kit-Bag, and Smile, Smile, Smile" From the moment we arrived at the splendid Four Star Radisson Blue Hotel everything was ‘custy’ I loved the pre meal reception where we could get our pre drinks, and this is where the interactive experience started, quite soon for example I was presented with the case of dodgy watches, you guys made me crack up! Then after being led into the dining area the various characters throughout the evening were fab, I just loved how they connected with everyone. So funny when the one guest that opted for vegetarian was sent up by Boycie. The pub quiz was hilarious, and the cast of characters Del Boy, Rodney, Boycie, Trigger, Uncle Albert, Cassandra & Marlene were so on point. Whoever came up with this concept to re-create what is surely one of TV’s all time favourite comedies as an interactive dining experience is to be applauded. Well I reckon Interactive Theatre should consider Acorn Antiques – Julie Walters serving soup comes to mind! For just £45 all this entertainment including a delicious three course meal ( delighted we could thank the chef ) perfectly evoking traditional ‘English’ eating out in the 80’s makes for the perfect evening and ideal for families and friends and not just the adults. So on our list now is The Fawlty Towers dining experience!

Immersive ‘rave from the grave’ experience

For those of us who remember Delboy, Rodney, Boycie, Cassandra etc it’s a must! And the food was good too!

very well thought out show come dinery experience. actors were fab and the atmosphere was fantastic. a must see for only fools and horses fans.

Best lunch and laugh I've had in years.

Brilliant from start to finish. Only complaint was that we were told the only place we could buy drinks was in the bar between 1pm & 1:30pm prior to going into the meal … this was not the case and a bar was available in the dining area .. after buying two hours worth of drink that then got warm!

We had so much fun celebrating my Dads birthday!

Really didn't know what to expect but had a great time. Relaxed atmosphere, the show & acting was great, we laughed so much. Would definitely recommend!

An absolutely fantastic night out. Such a good laugh

Had a really great time. Would recommend this experience to anyone. Very interactive dining experience.

Great show, didn't know or even realise it's possible to serve a 3 course meal while being this entertained. Actors are amazing and relentless, never a dull moment and interaction is spot on. Can not recommend this any more, its perfect.

A custy way to eat dinner!

The actors were amazing!!! Costumes were spot on. The story was very entertaining. The food was great. The only draw back was the prices at the bar!!!

From the minute the show started you were hooked, smiling & chuckling away! Great story line, audience participation and acting!! Food was good as well

Very entertaining and great that actors came round each table and spoke to everyone in character. Only criticism is the venue could have looked more like the pub rather than a hotel room. Food was nothing special but good.

You Plonker if you dont go

After seeing the musical was really looking forward to this dining show .. what a disappointment the venue is a hotel meeting room with no bar and the only decoration a few lengths of bunting, the cast consisted of 4 people none of whom were very good . The story was pathetic the only saving grace was that the food was edible . Save your money and go and see the show and have a meal out !!

From the minute the show started there was audience participation, & it was hilarious! Actors were great, the audience involvement was brilliant!! Would totally recommend seeing!!

Show spoiled by us being sat behind a pillar and missed a lot of it! Food average but ok. Drinks quite pricey. Good acting crew. Enjoyable overall

Dont be hesitant, go and enjoy

A brief outline of the evening. all go to wait in a room with a bar, waiting for main event. and I wont spoil it for the rest. The audience participation is required to boost the show so the actors can bounce of you. If you don't want to be in the highlight (like me) don't worry the actors intermingle and soon sus out who don't mind the spotlight. It is a clean, show with family comedy although because of the setting wouldn't advise children. It is good fun and we both really enjoyed it. there is limited music and lighting does the job

Went with my husband for his 60th birthday and our adult children. We all loved the show and laughed from beginning to end. A great, fun filled evening.

Good story line and interaction. Vocal impersonations could be better. Wasn't impressed by food. Fawlty towers much better. But actors put their all in. They worked hard.

You are drawn into the experience the longer it goes on. By the end you have met people and are totally comfortable in the surroundings

Such an amazing night!

I took my parents and boyfriend to see the show and we had an amazing evening. We love Only Fools and Horses and the show didn’t disappoint! Would definitely recommend.

It was fun from the start. The actors were so true to character. Would definitely recommend.

Fool to miss this show

Saw the show with my family and was the best night out. The interaction with the actors from waiting in reception to during the show was brilliant. So well done. Never stopped laughing.

Great fun for all the family

Great experience of immersive theatre and great fun for all.

Definitely a must see

Great show, really hard for the actors to ad lib for Two hours around the storyline when many customers threw in odd comments . These guys were professionals and played their parts very well. Food was ok, coffee would hav been nice to finish of the evening but all in all, good value and an enjoyable entertaining night.

Amazing and entertaining afternoon of comedy. Actors were brilliant

Great show. Great entertainment....and the food was pretty good too.

Reviewed on 19 May 2019 by Laura, Nottingham, United Kingdom

Brilliant night with brilliant cast of characters. My only complaint is that the drinks were overpriced at the bar and the food was a bit basic for the price paid, I was expecting a bit more top quality.

Must see for Only Fools fans

Great show...really felt like you were in the Nags Head. A lot of audience participation. Food was good and of course it included mange toute. Great way to spend a Sunday afternoon. Looking forward to seeing the photos.

A night out with a difference

This was a really fun night out with all the characters from the show brought to life. The interaction with the audience was hilarious and kept us engaged throughout the evening. After reading the previous reviews we weren’t expecting much from the food but it was delicious. We had chicken breast and bacon stuffed with cheese with mashed potatoes and mangetout (nice touch!) and the vegetarians had Mushroom Wellington. Definitely a cushty experience!

An absolutely brilliant night out - didn’t stop laughing from start to finish! Great actors who got the characteristics spot on - took us right back to the 80s! Highly recommended to anyone who is a fan of the show. Looking forward to trying their Faulty Towers experience next time.

Worst show I’ve ever been party to!!! Food dire and the cheesy sort of prompted script was an embarrassment to watch or be a part of , I wish a had paid £126 to watch a tin of paint dry

Not as we expected!!

The show was not as we expected, we was thinking that it would be a pub scenario, like small tables around a bar and space in the middle for the actors to re create the Nags head pub, The food was awful,especially the main course as the peas were like bullets, And the drinks were extortionate, the people sat next to me had identical drinks and there’s was 2.50 cheaper? Two bottles of standard size Peroni was £11.50!!!!! Overall, not impressed