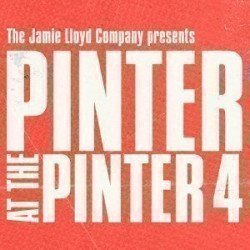 You love Harold Pinter's work. You may or may not have seen Moonlight and Night School. It's a great match. Now you can see both of them in one glittering production, part of a seven-production series covering a total of seventeen Pinter one-act plays. London is on tenterhooks, and with The Jamie Lloyd Group in charge, magic is about to happen.

Moonlight premièred at the Almeida Theatre during September 1993. It tells the story of Andy, a man about to die. As he lies on his deathbed he looks back at his youth, his loves and his betrayals of his his wife, Bel.

At the same time Andy's sons Fred and Jake, a pair of clinical, bloodless, intellectuals who reflect Andy's own brand of anti-intellectualism perfectly, hover in the dark nearby. Their conversation cycles around and around, endlessly examining their estrangement from their father, trying to rationalise the love and hate they feel for him and close the unmanageable gap that separates them.

The boys' uncomprehending isolation, experienced on the sharp edge between life, death and an afterlife, is mitigated by their little sister Bridget who, as her name suggests, bridges the howling gaps between youth, age, life and death. It's directed by the Olivier Award winner Lyndsey Turner.

Night School is typical Pinter at his best, thanks to its blend of comedy and menace, something he was rightly famous for and which makes his plays as disturbing as they are enjoyable. It's a potent combination first shown on TV in 1960 before being published in 1961, examining what happens when a criminal returns home from prison only to find his room is rented out to a tenant, a mysterious woman with a secret. It's set to perfection in the dodgy clubs and grubby boarding houses of 1960s London, and is directed by the inventive, hugely talented Ed Stambollouian.

Who is this show for?
Harold Pinter's plays are complicated and intellectual, written for adults. This production probably best suits mature people aged 16+.