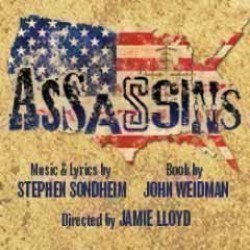 Assassins – Black comedy at its finest

This funny yet horrifying musical comedy is as black as it gets. The show consists of a revue-style portrayal of thirteen male and female assassins in a fascinating way, through a terrifying carnival game, exploring their madnesses, obsessions and motivations. Better still, the musical score changes in line with each era being portrayed, delivering extra drama and atmosphere.

Take thirteen assassins and would-be assassins. They've all tried to kill presidents of the United States at one time or another, but only four succeeded. What do they have to say for themselves? Are they just a bunch of crazy people, nothing like ordinary folk? Do they have anything in common with one another, or are their actions completely random?

This fascinating musical reveals how they might be more like us than we'd like to think, have a lot in common with each other and could – just maybe – blame the legendary American Dream and the nation's unique political culture for their madness. It's quirky, strange and very funny... in a thoroughly disturbing way!

Sondheim fully expected the subject to be controversial. He even expected a public backlash. But quite the opposite occurred despite the show's moral volatility. At the end of the day this unusual piece inspires audiences to think carefully about the motivation behind the assassins' actions, confronting the unpleasant in an attempt to “cauterize the decay and heal the sicknesses which lurk at the core of our society"

Show tunes include The Ballad of Czolgosz, Unworthy of Your Love, The Ballad of Guiteau, Another National Anthem, November 22, 1963, Something Just Broke, Everybody's Got The Right and more. If you fancy a whistlestop tour of the dark and often troubled minds of the USA's most notorious and outrageous political criminals, you'll simply adore it.

Assassins theatre tickets – Blame it on the American Dream...

Want premium, full price or discount Assassins tickets? We offer great availability and excellent value for money on the complete range of ticket types and seats. Just click this way!

Not knowing anything about Assassins, except that it was written by the brilliant Steven Sondheim and that it took a look at the people behind the assassinations/attempted assassinations of US presidents, I was left quite stunned afterwards. The music is, as usual, rhythmically and harmonically complex, the libretto is thought-provoking, satirical, funny, sad with satisfyingly amusing rhymes, which are typical,Sondheim. It is superbly cast.

Reviewed on 11 January 2015 by Anonymous