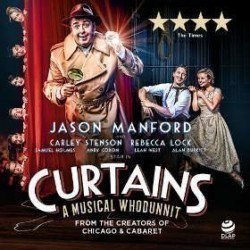 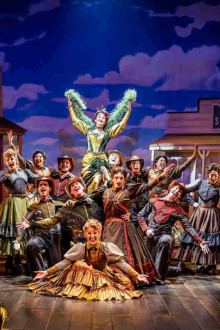 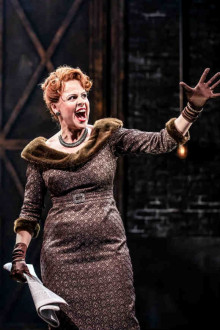 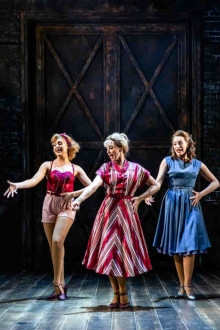 It's Curtains. It premiered on Broadway in 2007. Now it's due for its UK premiere at Wyndhams theatre, set to add loads of comedy sparkle to the festive season and into the New Year. Welcome to the funniest show for ages, starring the brilliant Jason Manford, stand-up genius, talented actor and incredibly good singer. What a great winter treat!

The story? It’s literally murder putting on a new musical, and when the star of a new Broadway-quality show called Robbin Hood - Jessica Cranshaw – is murdered on stage on the opening night, every member of the cast and crew is under suspicion. When they call in detective Frank Cioffi, who is a massive musical theatre fan with an uncanny nose for crime and an equally uncanny ear for music, he's tasked with throwing the show a lifeline as well as solving the murder.

Jason Manford has delighted audiences with The Producers, Chitty Chitty Bang Bang, Guys and Dolls and much more. Carley Stenson, who stars as Georgia Hendricks, has thrilled us with roles in Les Miserables, Legally Blonde, Shrek, Spamalot and of course the telly soap phenomenon Hollyoaks. The musical comes fresh from the talented creators of Cabaret and Chicago, and it's a Tony award-winning show.

If you're looking for a festive special to add lots of good cheer to the season, this awesomely silly, wonderfully funny backstage murder mystery musical of a whodunnit is jammed with catchy show tunes and stars zillions of unforgettable characters. There are so many twists to the plot you won't know whether you're coming or going... in a good way!

When this splendid Kander and Ebb musical premiered on Broadway the production was nominated for eight Tony awards. David Hyde Pierce won the Tony for Best Actor in a Musical for his portrayal of the policeman Frank Cioffi. The production team includes DLAP Entertainment and Walport Productions. The music is, of course, by the superb John Kander and the lyrics by Fred Ebb. The book's by Rupert Holmes, and the original book and concept were by Peter Stone. It's directed by Paul Foster, the choreographer is Alistair David, and the Musical Supervisor and Arrangements come from Sarah Travis. Set design comes from David Woodhead and the Casting Director is Jim Arnold CDG.

Who is this show for?
This hilarious comedy romp is recommended for people aged 12 plus.

What an outstanding show! Loved it - from beginning to end.

A breath of fresh air!!

Reviewed on 09 January 2020 by Helen, City Of Westminster, United Kingdom

The cast in Curtains are unbelievably talented. Great show perfect for all the family. While Jason Manford’s accent does slip occasionally it doesn’t detract from the overwhelming talent on show. A particular commendation goes to the actress playing Bambi who draws your eye whenever she is on stage and dazzles with her dancing.

Entertaining classic style musical. Funny and cheesy with a tongue in cheek nod to musicals of years gone by. Jason Manford is great!

Enjoyable but not groundbreaking.

Very enjoyable with excellent singing and dancing, perfect for a New Years Eve.

Curtains was fine. A slightly more modern take on a traditional style. Very Cole Porter with a little more innuendo. Surprisingly short on laughs for something with Jason Manford in the lead and with the word ‘hilarious’ used so liberally on the publicity. However, all performers executed the performance very well. The choreography was very good and the music and singing accurate and well performed.

We thought the show was brilliant, a great night out. Lots of good songs, it was well acted and very amusing.Highly recommended. 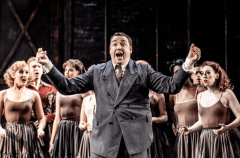 Review: CURTAINS at the Wyndham's Theatre
all shows