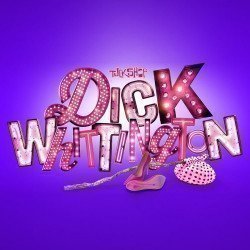 TuckShop are BACK in the West End for another hilarious all-drag panto this Christmas!

Join our hero Dick Whittington (Cheryl Hole) on his thrilling quest to find adventure fame and fortune in the glittering streets of Soho, with his feisty and funny pussy cat (Holly Stars). Will he be able to defeat villainous rodent Queen Rat (Choriza May), with the help of the Spirit of Soho (Kitty Scott Claus), save the city and win the hand of his love, the beautiful Alice?

Get ready to follow your dreams as this classic tale is re-imagined in TuckShop’s own way. Unlike any other pantomime you’ll see, written by Gareth Joyner, you’ll be gagging on Dick and his friends as they bring the spirit of Soho to the West End.

There are no special offers available at the moment but we still have great ticket prices for Dick Whittington at the Phoenix Theatre.

Reviewed on 02 January 2018 by Kevin, Holland On Sea, United Kingdom

The acting, singing, dancing, set, costumes and atmosphere were fantastic. We thoroughly enjoyed this show.

Outstanding costumes and very funny performances - can't now remember any of the jokes, but we laughed and laughed.

Thought the show was absolutely fabulous. The subtle rudeness, the flamboyant costumes and acting was tremendous. The cast was great, loved every single one of them. One of my all time favourite has to be Julian Clary he just makes it stand out. Well done I be definitely back next year.

Great show worth going. But the theatre the Palladium is old and needs a modernisation in the public parts. Toilets a disgrace. Out of 5 one was out of order!! Long long queues!!!

It was spectacular! Side splitting laughs from start to finish!

Top show so funny . Loved every minute of it

Amazing cast. Superb staging & special effects. Elaine Paige just needs to brush up on her lines!!! Would maybe play Memories or Don't Cry for me Argentina to the younger generation so they know who she is & why she sings to those particular tunes....

I’ve seen many Pantomimes over the years but the Dick Whittington at the London Palladium this year was the complete entertainment package, Fun , laughter, customs stunning, and acting simply BRILLIANT..... loved it.

A riot of colour, jokes, performances everything was just perfect. Standing ovation so well deserved. Huge congratulations to everyone front and back stage all involved, nothing could have been bettered. In my 71 years I have seen a panto practically every year but this production is by far the best I have ever seen.

Don’t listen to the reviews of 3 star. It is fabulous, full of fun and laughter for adults an children. It was packed out. Same as last year.

Absolutely must see show of 2017

Absolutely fun filled show from the very beginning !! The duet of Julian clarey and Elaine Paige was outstanding. Whether you call him Richard or dick this dick Whittington panto is a blast !! 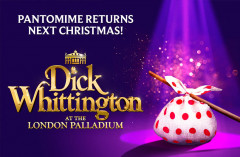 We’re barely into Spring but it’s already time to look forward to Pantomime, the UK’s traditional Christmas theatre treat. Two PR firms have announced festive productions in the last few days, one gigantic the other niche.

Let’s start with the giant. Last Christmas panto expert Michael Harrison brought large scale, big budget pantomime back to the London Palladium where it used to reign supreme in the 1950s and 60s. His Cinderella had an all star line up, was nominated for an Olivier Award and although rumours persisted that they were struggling to sell enough seats at the high ticket prices it’s widely regarded as having been a success.