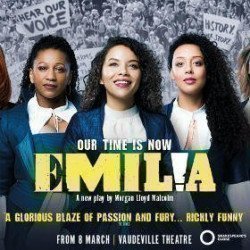 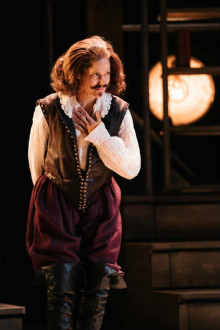 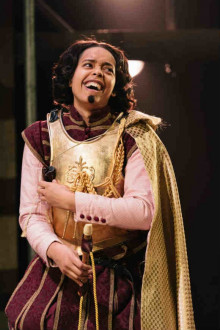 Welcome to Emilia. This is a new play, a grand speculative exploration of the woman who may have stolen Will Shakespeare's heart, who might have inspired his sonnets. Her name was Emilia Bassano, she lived from 1569-1645, and her father was an Italian court musician. She was a poet, mother, teacher and a feminist, but that's about all the information we have.

Playwright Morgan Lloyd Malcolm has taken the few facts we know about Emilia and invented a plot that turns her into a symbol of all women, of all the females who have been stamped on, shouted down and not allowed a voice for century after century. If you're a woman you'll already know that Emilia's story remains our own. True equality still hasn't arrived almost four hundred years after her death. We are still struggling to make our voices heard.

Lloyd Malcolm paints a boisterous picture of Emilia, a girl who isn't interested in the stately courtship games played by her fellow aristocrats. She wants to write, and it's a burning desire. The playwright casts her as Shakespeare’s actual lover, a woman whose words the Bard freely borrowed and used as his own.

In real life, Emilia was the mistress of the Lord Chamberlain. So she might have met Shakespeare, or might not. This speculative history is angry and passionate, furiously so. The final blazing address to the audience is so powerful it feels like a genuine call to arms, a demand for action, a clarion call for rebellion.

The story?
It's 1609 and Emilia is livid with rage. As a writer, wife, lover, mother and muse she remains unheard, uneducated and unequal, with little opportunity and almost no respect. She wants a choice, and a voice. Roll forward time to 2018 and all women are Emilia, her story is still our story, she reaches across time to touch our lives with passion, anger, laughter and song.

Times are changing... but not fast enough. Let Emilia inspire and unite us. We are all Emilia. Let's stand alongside her and be counted.

Who is this show for?
This show is about feminism. As such it isn't suitable for very young children, but OK for people aged 12 or more.

This was an amazing production of a historical and literary event which many were unaware. The struggles for women has been well documented through time, and it just shows that many events au have a female brain behind successes throughout history. It was funny and amusing but resonated the need for women to be heard. The acting was phenomenal throughout the show... BRAVO!!!!!

I went into this play knowing little about it. I thought the whole thing was great. I laughed and I cried with a standing ovation at the end.

A powerhouse performance and production. Unforgettable

I was captivated from the get go. Remarkable script, wonderful casting, compelling story line and clever staging. Clare Perkins is formidable - power and presence personified . . . As I grow, I must shrink . . .

The show was excellent. Great to have all women cast and live musicians. Well directed and actingredients was superb. Great for teenage girls and young women in particular to see with their female elders

Reviewed on 29 May 2019 by Masana, London, United Kingdom

A glorious powerful show, I laughed, cried and was roused to stand up and be counted. The writing, staging, music and acting all quite brilliant. This was a return visit and I would happily come again. This is a must see for all.

Reviewed on 27 May 2019 by Catrin, London, United Kingdom

Reviewed on 24 May 2019 by Emily, Billingshurst, United Kingdom

An absolute must see!

Possibly the best show I have ever seen on the west end.

Reviewed on 17 May 2019 by Chelsie, Amesbury, United Kingdom

Inspirational, motivating, insightful and emotional are just a few of the many words to describe Emilia. From 12 to 112, it will have an impact on you.

A moving, memorable and relevant must see!

Go see this show. Its clever, funny and hits home a strong message. Guys, do not think Im not going to see a feminist show, you will love it.