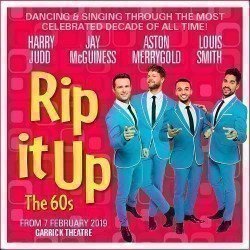 Rip It Up Tickets

About Rip It Up

Rip It Up description

Rip It Up – Bringing you the finest hits from the '60s

Expect the most remarkable Strictly spin-off boy band. Look forward to a string of dazzling '60s tunes from back in the day when women's skirts were shorter than belts and men felt coolly confident wearing deep purple velvet flares. You're in for a treat thanks to a massive, irresistible explosion of songs, dance, acrobatics, and remarkable visual effects. Welcome to Rip It Up 2019!

The band is made up of singers Aston Merrygold from JLS and Jay McGuiness from The Wanted, drummer Harry Judd from McFly and McBusted, and the brilliant Olympic champion Louis Smith whose eye-watering gymnastic feats seriously impress. So far so good. But the best thing is, all four are the most incredible, amazing dancers. And that's what makes this superb show really take off.

The four boys are joined by a large cast of talented dancers, singers, and musicians, all of whom collaborate to deliver a unique celebration of the 1960s' iconic tunes, sights, sounds and events, a magical decade that changed the world forever. The band members are all passionate about dance, of course. Aston was a Strictly contestant in 2017's competition, the 'People’s Champion’. Harry won in 2011. Louis won in 2012 and took the prize for 2017's Christmas special too. And, of course, Jay was crowned champion in 2015.

The songs? You're going to love this. There are tunes by The Beatles, The Rolling Stones, The Who, The Beach Boys, The Byrds, The Doors, Burt Bacharach, Elvis Presley, Bob Dylan, Aretha Franklin, James Brown, Marvin Gaye, Stevie Wonder, and loads more, all performed to perfection by a group of young men who weren't even born when the songs first hit the charts.

Genuine film footage from the decade support the music beautifully, and there are plenty of awe-inspiring visual delights to enjoy. This show really does showcase the atmosphere, the excitement, the rebellion that the decade signified in all its colourful glory.

Rip It Up – The 60s is a dose of pure energy. The tunes are uplifting, the artists legends in their own lifetime. If you adore Strictly, love the 1960s, or both, come along and sing along.

Who is this show for?
This show is recommended for people aged 8 or over, and children aged three or less can't be admitted.

Rip It Up reviews

One of the best dance/musical shows I have ever seen. The music was great and the singers and dancers were incredible. To be honest, it helped that the 4 celebrities were in it. Not sure it would have had the same effect without them.

This show has to be seen. Super story of the 60’s, music when music was music!!!!!!. Superb dancing and singing and a chance to see some stars and up and coming stars!, You can t help but sing and dance in the isle. Wonderful show.

Amazing vitality by all.

Get that get up and go factor, music and lighting just great, thanks to all.

Reviewed on 27 May 2019 by Jean, Wellingborough, United Kingdom

Reviewed on 26 May 2019 by Glenn, Ipswich, United Kingdom

The cast were terrific, not just the fours lads, but the band, the singers and the professional dancers.

Reviewed on 21 May 2019 by Stephen, Cambridge, United Kingdom

Reviewed on 19 May 2019 by Shareen, London, United Kingdom

Brilliant show, absolutely loved it The whole cast gave 100% throughout the show.This is the best show I have ever seen Brilliant,

Great show, only problem the singers encouraged the audience to dance but not allowed in he isles👎

Reviewed on 18 May 2019 by Sandra, Street, United Kingdom

Reviewed on 15 May 2019 by Laurence, Newark On Trent, United Kingdom

enjoyed every minute of it .it was a shame our view was restricted by very tall people in front of us.but apart from that we made the most of it and really enjoyed the show.Hope to come and see it again very soon.

Dance till you drop

Reviewed on 12 May 2019 by Stephen, Gloucester, United Kingdom

Reviewed on 10 May 2019 by Karen, New Malden, United Kingdom

A must see colourful, creative & fabulous

Reviewed on 10 May 2019 by Linda, Kilmarnock, United Kingdom

I liked the fact that there was no long breaks between the dances. Aston Merrygold outshone the other guys, unsurprisingly. A fun night!

This is a great show for all the famialy. Great to hear so many songs from the 60's singing and dancing first class.

Reviewed on 05 May 2019 by Martin, Biggleswade, United Kingdom

Reviewed on 05 May 2019 by Chris, Poynton, United Kingdom

Lots of Energy and Great Moves

I loved the show. So much good vibes and electrifying energy! It will really make you want to dance your way back home after the show!

Wowzer! Fabulous high energy performances from the whole cast. Particularly impressive male dancers supporting the four leads. Brilliant job. Cavin - loving your smooth voice! Moving and presenting well as ever! Continuity wise would have preferred all the girls to wear a more attractive coloured pair of skin tone matched tights. Great choreography! Brilliant integration of the many skills that each lead brought to the show. Looking forward to the seventies already!

Reviewed on 03 May 2019 by Efthymia, East Barnet, United Kingdom

Terrific show. Seats in the dress circle with clear view of the stage.

All 5 ladies came out exhausted. Don't k ow how the performers do it 5/6 days a week.

Started slow but built up to a real high at the end. The Stalls are not at street level but down around 30 steps. Check theatre accessibility before booking.

Top rate show no weak links in a fast moving show . Dancers some of the best we have seen in a long while only downside to the evening was Louis Smith did not appear due to illness but these things happen still enjoyed the superb show.

Reviewed on 21 April 2019 by Francis, Kingston Upon Hull, United Kingdom

Disappointed at first as louis Smith was ill and not in the show however the rest of the cast made up for the disappointment . The show is just fantastic . The professional dancers work so hard . The stars of the show never stop .

Great fun for fans of the sixties!

Whilst there’s no real story, the music is fantastic and the dancing amazing. Every song has a fresh routine and you’ll see everything from jive, to quickstep, to Charleston to waltz and more. Everyone was on their feet singing and dancing at the end. What a show!

One of the best shows in London....A must see

A veritable feast for the eyes and ears.

Go and enjoy. Be prepared to sing along.

I have been to most west end shows and i can honestly say this show is up at the top end of all i have seen. Those 4 boys are so talented and how Aston never won Strictly Come Dancing is crazy ! Well done to all involved in this amazing show.

Really great show, especially if you love the music of the 60's. Brilliant for dance fans and music fans alike

The best show ever with the incredible talents of Judd, Mcguiness, Merrygold and Smith . How do they keep up that energy for 3 hours and that relates to all the other dancer's and singer's. The choreography is amazing.The music of the sixties is sheer magic which we will never see again

Excellent entertainment. The mix of song and dance was great. Everyone was already on their feet by end of the first half let alone the finale.

very creative and true to the music vibe of the 60's

Join in the Big Party

80 year old. Not quite sure what I was going to see but loved it.

Audience loved this show. Total dedication by enthusiastic cast. Everyone standing for the encores!

Varied and full of energy.

Really enjoyed the show from start to end, dance routines were energetic and varied. The 4 stars looked like they were enjoying the show as much as the audience. Well done to strictly stars.

A must see for all

We booked the show for a family get together We just had the best time at a London show and met Harry Judd afterwards who was great The 4 lads were just terrific, the host was great, the band and dancers were all fantastic

Good music from the 60s with superb dancers 🙂

I like the music from the 60s and the audience could sing along with the band the great hits. The show had the fenomenal Stricly come dancing winners and all the others were very good too. We could see some ideas about the lots of revolutionary changings of the youngsters’ life in the 60s too. The music brought up a lot of nice memories from my young years as well, I enjoyed it together with the audience that gave a stand up applause to the dancers-singers 🙂

What an amazing show, we booked not knowing what to expect and it was really brilliant. Everyone involved was superb. Definitely recommend. Xx

A world class act bringing back memories of good old times, loved every minute and almost 3 hours flew by without noticing.

One of the best nights of entertainment I’ve seen in a very long time. My husband and I were blown away by this show. An absolute must see and I’m already planning on taking my friends to see it again. Unmissable!!

Brilliant night out with excellent music and dancing.

Brilliant on all levels

Not just a dance through the sixties, but some real ballroom dancing - all executed to a very high standard. Its exhausting just watching. Who knew Louis Smith could sing!

Fantastic show the four guys were brilliant dancers and singers really upped their game from Strictly. Support dancers, singers and lighting are also superb a great singalong and bop had by all.

The show was great. The dancers and singers were amazing and all were always us step with each other. They seemed like they all really liked each other and smiled so much.

Reviewed on 23 February 2019 by Virginia, Marlboro, United States Of America

Fantastic, colourful a must-see if you like m :) sic and dance

Loved it from start to finish. The stars were fabulous and the music and dancers and singers were amazing.

Little too much talking for my taste. However the ‘boys’ are incredible & the interaction with the audience makes for an excellent show leaving you with a definite ‘feel good’ feeling. Would love to see it again.

The show was very uplifting and full of life and colour. The dancing by the boys was second to none.Everyone taking part seemed to be having great fun. I found the presenter (C Cornwall) a little too "in your face" He needs to calm down Otherwise a wonderful experience and I would recommend it to anyone BK"JImmy" James

Excellent performance from all the Cast. Dancers were fantastic. Breathless from start to finish.