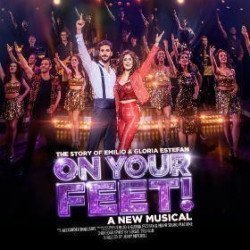 On Your Feet! Tickets

About On Your Feet! 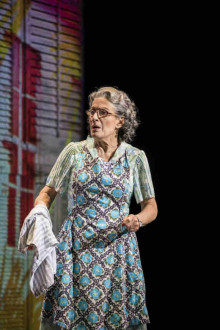 On Your Feet! description

On Your Feet is a dazzling new musical fresh from the talented pens of the Estafans, namely Gloria Estafan, the Cuban-American singer, songwriter, actress, and businesswoman of  Miami Sound Machine fame, and her equally talented husband Emilio. Fresh from Broadway, it's a totally amazing musical... and now it's over here, ready to rock theatreland with a collection of beautiful tunes and a real-life love story.

What's the plot? On Your Feet weaves the true tale of Gloria and Emilio's love, following them from their origins in Cuba, through their years on the streets of Miami, to international stardom. It's exhilarating stuff, and incudes lots of the band's best-loved hits: Rhythm Is Gonna Get You, Get On Your Feet, Don’t Want To Lose You Now, 1-2-3 and plenty more.

The show is beautifully, joyfully directed by the two-time Tony Award winner Jerry Mitchell, who delighted London with Kinky Boots and Legally Blonde. The choreography comes from an Olivier Award-winner, the talented Sergio Trujillo, who helped make Jersey Boys such a massive hit. And the book comes from another Academy Award winner, Alexander Dinelaris, who was involved in the magical Birdman.

Gloria Estafan herself has won an astonishing 26 Grammy awards and has sold more than 100 million records across the world. Emilio Estefan is a founding member of the Miami Sound Machine. Together their unique fusion of Latin, pop and disco changed a generation. Whether or not you danced the night away to Miami Sound Machine tunes in the '80s and '90s, you'll love it.

Who is this show for?
Great tunes and a fabulous story mean this musical suits anyone over the age of four who loves musical theatre at its best.  This is a family-friendly show, but there's a little bit of strong language. If you want to bring the kids, exercise your own judgement. Children under four aren't allowed in. We're looking at a strictly limited season, so grab tickets for the show at the London Coliseum as soon as they're available!

On Your Feet! cheap tickets

On Your Feet! reviews

Great all round Latino music, dancing, costumes and full of energy thoroughly enjoyed the show shame it only had a short run.

Such great music with a fitting story line

Got on my feet!

Absolutely brilliant. Wasnt sure what to expect as not a fan of Gloria, but it was amazing. Superb acting / singing. Stage sets were beautiful. Lighting was out of this world. Was like being at a concert as well as a theatre performance.

It was as if we were transported to Cuba .

Good fun for The whole family.

The show is enjoyable and easy to follow. It’s a good story and the music is great. It was overall fun and enjoyable.

Great storyline had me gripped, music , singing , dancing and acting were fantastic and great party atmosphere in the audience as we got up on our feet and danced, really want to see it again cc

As a salsa lover this show was fantastic. Performers were great, music full of energy. Left me in high spirits.

As Avid theatregoers we were excited to go and see this show but unfortunately the best thing about it was the beautiful theatre and the front of house staff as the show was amateur, poorly acted with cheap looking scenery and a very poor storyline

A must see for Gloria Estefan fans!

Such a fab show, singing, music and acting all excellent! Fab view from the front of the dress circle, plenty of leg room and comfortable seats. Had our seats upgraded from the balcony as it was closed.

Great evening. We were in row G really enjoyed the show . Lighting at times was really dazzling. Loved seeing the band on stage. Would recommend to my friends but I know going to Manchester soon. .

What a super show. Great music, dancing and story. I thought the cast were very energetic and looked like they were having fun. Our seats were upgraded from the balcony to the dress circle which made us very happy!

Definitely will recommend to see to see the show

Well worth a visit. Brilliant

Great show, theatre upgraded our seats for free, no food or drinks allowed ( except sealed water) bags are searched ( so keep your sweets in your pockets!)

A fantastic show with a true and sad storyline the music,singing and acting are great,you are forever wanting to join in and have that opportunity at the end. Highly recommend this show if you get the chance

Brilliant show. A must see

If you’re an 80s or Gloria Estafan fan then you’ll love this! The singing and dancing is great. Am surprised that the theatre wasn’t more full

Reviewed on 30 July 2019 by Nisha, Kingston Upon Thames, United Kingdom

Inspirational true emotional story! And with lots of music and dance! And the band is amazing!!

A musical drama, with comedy, telling of Gloria & Emilio Estefan's meeting and journey to stardom. The dancing and acting was very, very good and the singing was as exciting as one could expect.

Great show with excellent sound and lighting and set in a beautiful old theatre.

We were on our feet. The music and great performance of the cast swept us off our seats. The cast was so good, the voices, the dancing everything was top. We can highly recommend the show.

The show was supposed to be a sell out but I would say that the theatre was only half full. My wife enjoyed the show but I was not so impressed. Whilst the first half had the main back story I felt that the music could have been integrated more in the second half rather than being mainly at the end. An ok show but slightly disappointing

A time to remember

This show has a feel good factor right the way through.

Booked for my wife as she’s a big 80’s and Gloria Estefan fan, the show was excellent from the start to the the big finale where literally everyone was “on there feet Brilliant.

The music was fantastic! The songs were packed with excitement and enjoyed the choreography that went with them.

Dance to the Rhythm of the Beat.

A musical dance experience, suitable for all ages.

Interestig biografical story including the musical history and lots of nice memorable music for everyone and particular music lovers, get yourself a lovely knowledgable and colourful bulletin from attendant before the start of the show

A lovely musical for all the family

I saw the show yesterday and absoulutely loved it, i cannot get the songs out of my head. Brilliant story telling and a real feel good musical extravaganza.

Entertaining, vibrant, showcased the music of the artist

Well worth the money great entertainment must see

must see dont miss it while its on

awesome this is defo a must see show as the title says on your feet and you are Latin music Latin dancing brilliant ---compliments for making a brill day out to all the cast musicians and Gloria for sharing her story...go go go and see it.

Fun filled colourful a must for all dance lovers

Thouroughly enjoyable show would have loved a longer finale

This show is a must It was absolutely fantastic

Definitely get on your feet at the end of this show. The singing dancing and music were perfectly executed. Loved the costumes, I went with a big Gloria fan and came out with every intention of getting a CD. We were on level 4 balcony and had a good view and the sound was perfect, it is very high up but it did say this on the website so no complaints.

A fantastic show, great storytelling, music was amazing with Gloria’s hit songs! Loved the brilliant dancing and singing. I would highly recommend to my family and friends! 👍🏼🎉💃🏻🎤

Upbeat lively enjoyable show and a must see !

Well worth a trip to see this show! Music, dancing, singing and cast amazing Definitely recommend it !!!

The spanish rythm will drag you and you can't stop dance. The actors are amazing and make you feel part of the show. 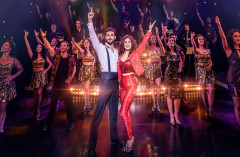 Review: ON YOUR FEET at the London Coliseum
This show is now closed.