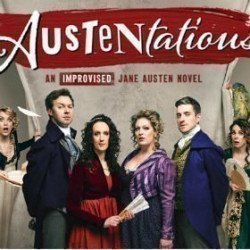 See a regency tale like no other featuring wilful heroines, haughty gentlemen, wayward vicars and hilarious consequences – no two shows are ever the same and swooning is guaranteed!

Returning to the Fortune Theatre in the glittering West End to entertain the society of London, this smash-hit improvised comedy features a cast of the UK's most acclaimed and quickest improvisers and has dazzled audiences around the UK in seven national tours and multiple sell-out seasons at the Edinburgh Festival Fringe. Prepare your carriages and dig out your top hats and bonnets. It is, after all, a truth universally acknowledged that anyone in possession of wit and good taste must be in want of great entertainment. Whether you’re insane for Jane or don’t know your Bingleys from your Darcys this hilarious spectacle is not to be missed!