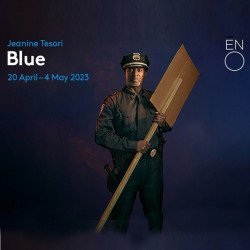 A generational rift leads to father and son at odds, with the fate of the family at risk.
Asking ever relevant questions of race, duty and the extent to which loyalty can hold before breaking, Blue follows an African-American family as the patriarch’s job as a policeman clashes with his activist son’s notions of equality and justice.

Marking the UK debut of Blue, the acclaimed Tony Award-winning composer Jeanine Tesori’s score will be fused with the direction of ‘fast-rising’ (The Guardian) star of British theatre Tinuke Craig, to produce an intimate family drama with a devastating emotional core.

Book your opera tickets for a ‘powerful’ (New York Times) story of a family torn asunder, in Jeanine Tesori’s Blue.

Next Performances for Blue at the London Coliseum

We have a great selection of cheap Blue tickets. We can help you save up to 70% on Blue tickets! If you're looking for discount theatre tickets have a look below for our latest offers for Blue at the London Coliseum.

There are no special offers available at the moment but we still have great ticket prices for Blue at the London Coliseum.