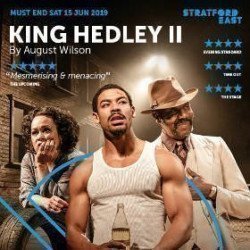 1980’s Pittsburgh, a city in decay. Against the backdrop of Reagan’s America, King, an ex-con, is trying to rebuild his life and start a family.

He’s got hopes and dreams of opening a video store and building a new life. If only he can get ten thousand dollars together, if only he can catch a break. In his dusty backyard he plots and plans with his friend Mister, but is this all a pipe dream?

Featuring Lenny Henry as smooth-talking hustler Elmore, August Wilson’s touching and angry King Hedley II is a quest for redemption for one man and a whole community.

'Mesmerising and menacing' The Upcoming ★★★★★

'Atmospheric... builds with the thunder and fury of the most savage Greek tragedy.' Time Out ★★★★

'Beautifully executed... brilliant monologues that hit you in the gut.' The Times ★★★★