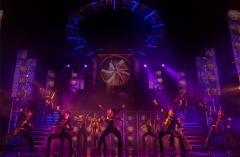 THRILLER LIVE, the long running West End concert/musical celebrating the life and music of Michael Jackson is still one of London’s most popular shows and it’s about to sail confidently into its tenth year making it the 6th longest running musical currently playing in the West End.

190,000 extra seats have been released for dates right up 7 April 2019 and we’re promised extra treats, to be announced, to celebrate Michael Jackson’s 60th birthday in August and THRILLER LIVE’S 4,000th West End performance.

They go on to remind us “Thriller Live is unlike other West End musicals. There is no script or story, it is instead a eye-popping celebration of Michael Jackson’s music and dance legacy, bringing to life on stage his distinctive high-energy dancing and the pulsating sound of many of pop’s greatest hits. The show changes each year with new numbers added, and features specially created video footage and effects and dazzling choreography by the show’s award-winning director, Gary Lloyd”.

Meanwhile the THRILLER LIVE World Tour continues with dates across the UK, Germany, Poland, Kuwait and Dubai through to summer 2019.

This hit show looks set to run for as long as people cherish the music and memory of Michael Jackson so we can expect it to be providing West End audiences with feel good, undemanding entertainment for a long time to come.

Why not revisit the evergreen hits of pop royalty soon. It’s the perfect night out with which to let your hair down and sing and dance a long as first class performers bring everything to fresh and vigorous life.

It’s a great way to celebrate a birthday, or for an office night out and you’ll be singing the infectiously catch tunes for weeks afterwards and maybe busting out a few of the dance moves at the bus stop.

Tina Turner is the new Rock Queen of the West End

There was plenty of press enthusiasm for TINA, a new musical based on the life of legendary artist Tina Turner, when it opened last night so it comes as no surprise that this morning producers announced that 140,000 new tickets will go on sale today and you can now book until 16 February 2019.