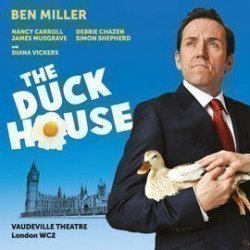 About The Duck House 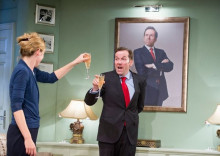 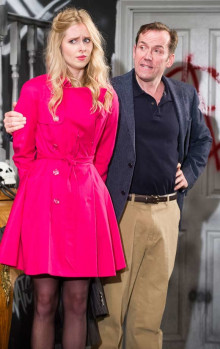 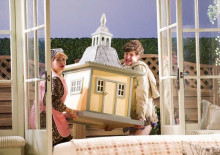 The Duck House – An hilarious tale of dodgy political dealings

Ex-Tory MP Sir Peter Viggers must rue the day he claimed back a whopping £1,645 against expenses for a duck house at his home. Seldom have ducks been the cause of such scandal, gossip and media attention, so much so that the term Duck House is still synonymous with bad behaviour in the corridors of British power. Sadly for the ducks, the duck house was later sold and the proceeds donated to charity.

This new play comes fresh from the pen of funny man Dan Patterson, who writes BBC2 TV’s Mock The Week and was responsible for Whose Line Is It Anyway. He’s joined by the supremely funny writer Colin Swash, who pens the ever-popular news quiz Have I Got News For You. Between them, they bring the MPs expenses scandal to the glittering West End stage to absolutely hilarious effect.

The Duck House - The story

As the star of the show Ben Miller said in an interview with BBC News, "They say that comedy equals tragedy plus time, and traumatic as the expense scandal was hopefully we can all now have a bloody good laugh about it. If any MPs don't like it they can always claim for it on expenses."

The story kicks off in spring 2009. Gordon Brown, the country’s Prime Minister at the time, is facing a general election. The Labour back bencher Robert Houston is determined to hang onto his MP job, which he feels he can only do by switching sides to the Tory party. But when the MPs' expenses scandal breaks, everything goes horribly pear shaped.

The play's authors, Dan Patterson and Colin Swash, are familiar faces in the world of British political satire, with 50 years’ writing experience between them and remarkable track records. Swash has penned gags for more than 50 series of Have I Got News For You, and also contributes regularly to Private Eye magazine.

Directed by the talented Terry Johnson, who was responsible for the smash hits Hysteria and End of the Rainbow, the play opens at the Vaudeville Theatre in late 2013 following a UK tour kicking off at the Yvonne Arnaud Theatre in Guildford. Expect hilarity and you won’t be disappointed. This is British satirical humour at its very best, billed as a classic that’ll just keep on giving… just like the MPs expenses scandal itself!

Would you like to buy premium, full price or discount The Duck House tickets? We offer really good availability on every seat and ticket type. Get ready to laugh your socks off!

A very good play based on a topical subject ie mp's expenses, however I felt that the second half did not match up to the laughs of the first half. Definately a play of 2 halfs

There was too much swearing that was not necessary and was out of place. Vulgar people would not be offended if there were no swearing, but decent people are offended when there is...so what does swearing achieve ? Reality is not the answer when we are looking at a comedy.

Quite superb.The most fun we have had at the theatre in many a day

The Duckhouse is brilliantly written and performed political farce. The whole family had a great time - well done to all involved

If you like satire or politically hues comedy this is a must. A modern knowing farce with non-stop one-liners, outrageous situations and relentless poking fun at the political establishment of all parties this is the best play I've seen in some time. The cast led by Ben Miller were all magnificent, with Diane Vickers a revelation in a non-singing role. Perfect.

The first half of this play was amusing and entertaining. Sadly the second half turned into a Brian Rix farce with a man in a nappy having cheese rubbed on his chest, hardly adult entertainment in my view and completely spoiled, what had the potential to be a humorous play. Not to my taste and wouldn't recommend this play.

Anyone with a broad mind and a general knowledge of recent political scandals will love this play. Ben Miller is marvellous and the rest of the cast are equally impressive. Loved it!

Very funny but not for under 16s

Good acting but because of swearing and simulated sex scenes I would not recommend to under 16s.

Reviewed on 19 February 2014 by Anonymous

This was the fun any one to go and see it

Reviewed on 16 February 2014 by Anonymous

I sat in the Dress circle which had a brilliant view - I would go for the cheapest ticket as all of the seats seemed to have a good view! It was a brilliant play that never had me looking at my watch.

Reviewed on 11 February 2014 by Anonymous

Very funny throughout the show. And obviously topical. Brilliant performances by all 6 cast members.

Reviewed on 10 February 2014 by Anonymous

THE SHOW IS A QUACKER

Reviewed on 09 February 2014 by Anonymous

A great way to spend the evening

This is a very funny, witty and enjoyable show. The acting is very good. It has a Fawlty Towers feel to the way the story line spirals out of control.

Reviewed on 06 February 2014 by Anonymous

Immediate contact with audience and maintains energy throughout. A must see comedy.

Reviewed on 05 February 2014 by Anonymous

We laughed from start to finish. Brilliant!!!!

Reviewed on 28 January 2014 by Anonymous

So funny really enjoyable excellent acting we all enjoyed the show and would recommend this show to everyone as a real good cheer you up factor.

Reviewed on 26 January 2014 by Anonymous

Reviewed on 26 January 2014 by Anonymous

Reviewed on 18 January 2014 by Anonymous

Reviewed on 17 January 2014 by Anonymous

A real must for theatre goers, good story good acting and good delivery

Reviewed on 08 January 2014 by Anonymous

It's a hilariously funny play; we thoroughly enjoyed it.

Reviewed on 08 January 2014 by Anonymous

One of the funniest shows I've ever seen.

The show entertained us throughout and let us understand the story that happened before our eyes at our own pace.

Disliked the show after 10 minutes because it turns into slapstick. Some good lines wasted

Loved it, thought the story was entertaining , enjoyed the humour.

Reviewed on 03 January 2014 by Anonymous

Very funny but lots of bad language. Think it only suitable for over 16/18.

Reviewed on 01 January 2014 by Anonymous

Give this a miss - it could have been great with the subject matter but it descended into little more that an old time slapstick farce with too much swearing.

Reviewed on 01 January 2014 by Anonymous

We were not expecting this show to be so outrageously funny. Perfect comedic timing by a faultless cast - everyone shone! Most suited for an adult audience with an interest in current affairs with so many brilliant one liners. We laughed through the whole show -together with the whole audience. When booking tickets be aware that the rake of the stalls is quite shallow and the circle obscures view of top of stage in the rear rows. We sat in row J which was really good, but still had a bit of head dodging to do as a tall couple sat in front of us. We enjoyed it so much we are planning to see it again with friends in the new year.

Reviewed on 08 December 2013 by Anonymous

Very clever script, and obvious up to the minute additions.

Reviewed on 06 December 2013 by Anonymous

This show just had to be made...totally takes the mick out of MP's and the scandal that brought about the downfall of some of the theiving bas*****. Well acted, Ben and Simon were fantastic...and the Panda constume...well. Please just go and see it...i bet the show is new every night...they were adlibing with news comments from this week to keep it current. One word: Superb!

Reviewed on 05 December 2013 by Anonymous

Such a good laugh at the Vaudavlle

If you want to come out of the theatre laughing, this is the play for you. A good basic knowledge of political scandals over the last couple of years adds to the experience. Overall, a witty,astute and well-written play which moves frequently into hilarious farce..

Reviewed on 03 December 2013 by Anonymous