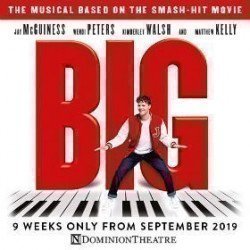 About Big The Musical 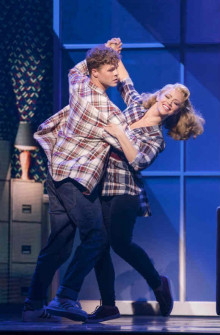 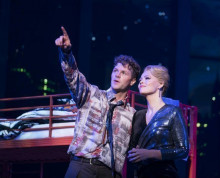 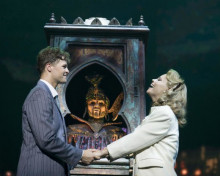 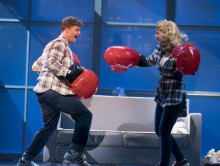 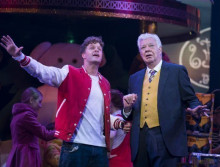 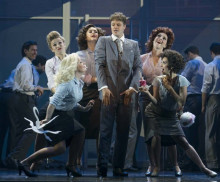 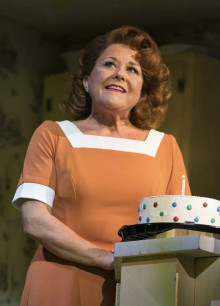 Big the Musical – Set to be a really BIG hit!

It's Big. It's bold. It's heartwarming. And, just like the movie, it's great fun. Welcome to Big the Musical, the stage version of the 1988 Tom Hanks film that delighted a generation. If you remember the piano bit, the kissing bit, the super-sad but sweet ending and the rest, you'll adore this very special show.

The movie was a massive award winner. Tom Hanks was handed a Golden Globe for Best Actor, a Funniest Actor in a Motion Picture award and a Saturn Award for Best Actor. The movie won a Saturn award for Best Writing, a Los Angeles Film Critics Award, a People's Choice for the Favourite Comedy, and an ASCAP Film and TV Music Award. But most of all it's a story loved by people of every age, from every background, in every country. This story has international appeal, and brings a smile to every face.

Look forward to a fun-filled family spectacular of a musical this autumn, inspired by the smash hit film. It makes its long-awaited and eagerly-anticipated West End premiere at the Dominion theatre from September 2019, and tickets are predicted to sell like hot cakes.

The plot? Young Josh Baskin is twelve years old and as far as he's concerned, life is rubbish. One night at the fair he spots one of those crazy fortune telling machines, the ones with the dummy of a person inside it that you put a coin in, and he makes a wish, an idle wish he doesn't think will come true. It's magic after all... and magic doesn't exist. But his wish to be big is granted and he's suddenly trapped in a thirty year old adult body, a fully paid-up member of a grown-up world he actually doesn't understand. Is being big really as great as he thought it would be?

Josh eventually gets a job with the MacMillen Toy Company in New York, and ends up testing the new toys. His fellow employee, Susan Lawrence, falls for Josh, but when the pressure of living as an adult gets too much, he becomes more and more desperate to go back to being a boy.

This is a hilarious, heart-warming and big-hearted musical show that's set to light up theatreland for an all-too-short nine weeks before it takes itself off to charm audiences at the next lucky venue. Grab tickets while you can.

Who is this show for?
This show is perfect for people aged 11 or more, just as good for big people as little ones!

The story, set, acting was absolutely brilliant. All the characters were cast perfectly, in particular Wendy Peters, Jay MGuinness and Kimberley Walsh. The songs in the show let it down as they were tuneless and unmemorable- I cannot remember one song andxwuth so many brilliant singers think the show missed a trick.

I love Jay McGuiness so am a bit biased, but I was very impressed with the whole show

Original music, funny & sad moments with fabulous performances from all the cast.

Very lively show, all the actors gave their all to give the audience a great time.

Fun and easy watching, with a little 80s nostalgia thrown in

It was very funny and the acting was spot on. The music is what you would expect from a musical.

Awesome show from an awesome time

One of the best shows I have ever seen.

We felt the storyline was rushed through. Key elements were left out...the music and lyrics were not memorable at all. The sets were disappointing also, no wow factor. The added parts to the story line, did the original classic no favours.

Great show with excitement for all the family. It had several elements of humour which kept everyone entertained.

Unfortunately not a patch on the film. The set design is very clever, some choreography very good, good voices from the lead singers but the story line and character development are poor and uninteresting. Overall a boring 2 hours. What a shame.

If you liked the Film, go and see the Musical

Fantastic cast, excellent experience. I have watched the film many times, just loved the theatre experience. Great value for money.

The show was fine, second half better than the first half. However having paid full price for okay seats to find out if we had waited and brought tickets now they would have been half the price for better seats was pretty gutting. The show was not worth the money we paid and I won’t be rushing back to see it again.

A must see for BIG fans

Saw the matinee today. The cast were all excellent, especially Jay and Kimberley. The younger cast were so energetic and acted well. Such a feel good film/musical, some very touching parts. Brilliant performance, would recommend.

Such a clever storyline, which I have been telling my grandchildren for years DONT TRY TO GET OLD BEFORE YOUR TIME, ENJOY YOUR CHILDHOOD IT'S PRECIOUS!

Totally spoilt by 2 people one on either side on their phones the whole way through , my disabled son was very distracted by this such a shame for us we flew in from ireland

A real feel good show with actors of all ages integrating well and singing and dancing with an infectious enthusiasm.This far exceeded my expectations and I would thoroughly recommend it.

A great show so glad we saw it.

The show was entertaining and the cast did its best, but the story was not written as a musical and may have been better as a play.

Big fun on a Saturday afternoon

Great entertainment, loved the digital screens used for set. Iconic scene was well presented. How I laughed as Josh threw Susan onto the trampoline!

Energetic show and lots of fun

Not one for hard core musical fans but lots of fun for a family show. A little over long.

Lovely show, entertaining and you leave the show smiling.

Good show with good cast. Well worth it.

Set was awesome ! Love the story !

Reviewed on 13 October 2019 by Nolan, Bishop, United States Of America

Fun afternoon, catch it before it ends on 2nd November

The Best Musical of the Season

Absolutely heartwarming, funny and up lifting. We went Saturday 12th October Matinee and finished the show with a full stand ovation! Brilliant cast esp Jay, Wendi and Kimberley. And of course young Josh and Billy.

I wouldn’t bother going to see this show

The Show did not do the original film justic. The show didn’t grab my attention in the first 10 minutes so it lost me.

Such a good adaption. Done beautifully

A great show with fantastic cast. Jay was remarkable and incredible in the role

A must see Fabulous

Oh wow Big the musical was fantastic was start to finish. Amazing cast and music and set. I went to the matinee show and I had a great seat the view was great. I reccomend this show to all my friends and family.

Not really interesting and one of the worst I've seen...

Not really an interesting show for the adult audience. At times it seemed boring and a bit childish. I would say this is more for young teenagers.

Great cast and Jay McGuiness is perfect in the lead. Love love love that there dancing numbers, where he absolutely shines.

If you love the film your love the musical

A joyous show with good songs and excellent acting, dancing and singing by all the cast. The orchestra were all excellent as well.

Big up to this show!

Great show and very true to the film. Excellent job by the cast and we had a great night out - well done!

Great show, a definite must see!

The music and singing was awfl. I ended up walking out it was so bad.

This was excellent. Much better than I imagined. The production and staging was brilliant. Smooth and seamless. Acting, singing and dancing brilliant too. One of my favourite musicals

Wish there had been more dancing

Good entertainment if you love the original film

Very colourful enjoyable Good entertainment. Not as good as Bat out of Hell 😊

Show was entertaining and well delivered. Everyone was great, especially the kids and Kimberly.

Acting and singing excellent from whole cast. Stunning voices from all main characters. The way the stage was set and used was excellent and made the experience even better. The way young Josh returned to older Josh in his dream was so well done. The whole production was brilliant. Would love to see Big again.

A nice place to escape to

Great show with a fabulous cast. Some very catchy songs.

A joyful evening of pure entertainment

The audience was on its feet applauding everything and the cast were brilliant. I came away smiling and happy.

Fantastic show , actors were brilliant , it was funny and the stage sets were great

Fantastic and such fun.

Loved the film and loved the show, the cast were brilliant, so talented and wonderful. Definitely recommend.

What a big hearted show great dancing wonderful actors/ singers great stage set everything came together and transported us back to the Tonk Hanks film. This show is top talent the two leading character have believable chemistry the whole show was so entertaining so enjoyable we would definately recommend it!! Want to go again

Cringe worthy at times, great at others

Watch the film first. The story is a classic and some of that comes through the stage play. Very much a curate's egg that tails off after the interval. My favourite lyrics: 'We could stay in a big hotel in the Bahamas and spend all day in our pyjamas'

I received the tickets for my birthday and had an absolutely amazing time. Jay was brilliant.

Jay was extremely good and so were the others. Good fun show.

A lovely brilliant fun show for anyone who loves music, dancing and fun. Plenty of humour and it’s a bonus if you’ve seen the film.

Excellent show enjoyed every minute of it. The singing and dancing were brilliant. Would thoroughly recommend.

BIGgest and one of the best shows in town

BIG was excellent. Loved the film but I think I liked the show equally as much if not more. What added to my experience was the fact that we attended on Press / Gala Evening and it was so good to hob knob with the Stars and walk the red carpet. Amazing show and overall experience.

I thought this was a lovely nostalgic feelgood show, exactly what the Doctor ordered. The songs are catchy, the cast are brilliant, I really enjoyed it.

Good family show, story is great with a good insert of humour included.

Unspecial but worth seeing

Great show as the acting was excellent and the staging of such a well known film was very clever.

We went on opening week, first matinee. Young josh fluffed his first lines - and all I did after that was wait with baited breath to see if he could cut the mustard. American accents are poor - would be better if they just spoke with normal accent rather than the terrible acted ones. Brilliant story - songs could be Better and stronger. Good to fill an afternoon but wouldn’t rush to see this one if you have an evening you want to see a show - probably lots of others that be better to see. Finale weak - no one got up to dance. Needs more work and acting needs to be more polished as this is the west end after all.

Cast were brilliant, they carried the story well, singing was wonderful, as was the piano playing. Everyone had so much energy, and the kids were great. Kept us completely enthralled for the whole show.