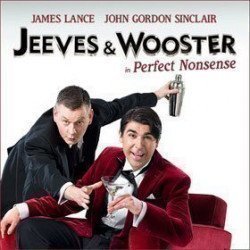 About Jeeves and Wooster

In 1915 P.G Wodehouse wrote a short story called ‘Extracting Young Gussie’. For the next 60 years or so the characters he created, Jeeves and Wooster, were firm UK comedy favourites. The author’s last novel, Aunts Aren’t Gentlemen, came out in 1974 but his stories continued to delight readers, even more so when the British TV series proved such a hit in the early 1990s.

The TV series won several British Academy Television Awards and now the excitement is building as the first P.G Wodehouse-inspired play to be approved by the author’s Estate takes to the stage at the Duke of York’s.

It’s directed by Sean Foley, a member of the comedy duo behind hit shows like the Olivier Award-winning Morecambe and Wise show and The Play What I Wrote. In 2012 Foley was nominated for an Olivier for his involvement with The Ladykillers, and he brings all his considerable magic to bear on Perfect Nonsense.

According to an interview in The Guardian newspaper, Foley wanted to do the play the minute he read the script. "I think anyone who is interested in or loves comedy would be a fan. It is such hilarious and brilliantly written comedy. Just in terms of being a comic stylist, writing wise, I don't think there's really anyone better than Wodehouse. The rhythm of his sentences, the way he lines up a joke you don't see coming, the way he puts words together is funny in itself. It is wonderful material to be dealing with."

Jeeves and Wooster - The story

Jeeves and Wooster take a trip into the glorious English countryside to visit an acquaintance’s country mansion. Madeline Bassett, their host’s daughter, is a drippy type and of no interest whatsoever to Bertie until he’s dragged unwittingly into a horribly frightening situation. Unless he can persuade Madeline to marry Gussie Fink-Nottle, her father’s newt fancying friend, Bertie will have to marry the beastly girl himself!

Expect all sorts of hilarious and improbable antics from Wooster as he tries desperately to avoid a horrid fate, ably assisted by the un-flappable, wry and gentlemanly Jeeves. Brilliant.

Jeeves and Wooster theatre tickets – Laugh your socks off, chaps

Want premium, full price or discount Jeeves and Wooster tickets? We offer excellent availability on every seat and ticket type, from low cost to premium.

Within 10 minutes we knew this show was rubbish. Silly slapstick that wasn't even funny and it was nothing like Jeeves and Wooster. The worst London show we've seen, so poor that we walked out at the interval. It's a good job it finishes in a few weeks!

Reviewed on 07 September 2014 by Anonymous

royal circle a good view front seats in the stalls too close!

Excellent interpretation of the story and they did not try to emulatecthe TV version.

A great night out!

Very cleverly done with only thee actors - who were incredibly energetic. However, three actors did seem rather few. Were near the front and had some problem with the lights shining at us.

The show was very cleverly done it held my attention the whole show and the 3 actors worked very well together and of course there were some very funny parts.

If you're out to have a good time you will enjoy this show. Don't look for depth and deep meaning, just enjoy!

I say, what a spiffing wheeze to plonk old Bertie on stage to tell the tale himself of that lunatic foray to old Sir Watkin Basset’s place. His man, Jeeves, is a tower of wotsit as usual and conjures up all manner of scenery and atmosphere besides keeping Wooster on course and it’s Jeeves and the other gent’s gent, Stebbins, who provide lifelike representations of the rest of the Totleigh crowd, including that absolute blighter, Roderick Spode. Like all things Wooster its complete nonsense and a real rib tickler that gives new meaning to the words Jolly Good Show! So, old sport, if you’re gasping for a laugh, cut along to the Duke of York’s and by the time that you stagger out you’ll be gasping from a laugh, hey what.

Overall a good (non-original) story but the slightly strained accents and OTT slapstick by Seppings rather dropped the show from a 4 to a 3.5 / 5

Excellent night out, very funny and amazing that there are only 3 actors seems more like 10. Good night out.

This was a great show from start to finish - I was a little hesitant when I saw that Robert Webb was now playing Wooster, as I have not always been a great fan of some of his work but my mind has been turned round 100% - he was great and so were the other 2 characters. A thoroughly enjoyable show & I would recommend it to anyone who wants a great evening and a good laugh!

Wickedly well acted, great etertainment, a real tonic for the blues. A must see show.

It felt like the audience was part of the show&fun and not just spectators! What an amazing cast...Fantastic!

Marvellous visit to Jeeves and Wooster

A bit apprehensive at first seeing that there were on three actors in the cast but the minute the curtain went up it was magical. The storyline was well presented in a very imaginative way - not what I expected - and I laughed all the way through as did a very full house. All three actors delivered their lines clearly such that you did not miss some of the aside jokes. A very entertaining evening.

Amazing show . The sheer amount of work put in by all 3 actors was nothing short of miraculous . A laugh out loud performance

Three actors playing all the parts, in the manic world of Jeeves and Wooster, what's not to like.

Not what I was expecting but well acted

It was mostly physical humour, whereas I was expecting witty repartee. The writer did keep some of the jokes in the style of the television series, for example Wooster's insistence on 'new fashions' and Jeeves's disapproval but otherwise transferred all the jokes to physical comedy, funny costumes and making everything over the top. Now, the actors did this really well - they completely committed to it - but you need to want this to find it funny and I didn't, I really wanted some subtlety. Other comments: if you like Jeeves, beware he's only onstage for one-third the time because the actor has multiple roles - also cutting down on the time Jeeves and Wooster can play off each other, which seems a shame because it's such a big part of their charm; also the story the writer has adapted is one that the TV series did in two parts and to get through it all a reasonable amount falls into exposition in the play.

If you like the silliness of P.G. Wodehouse's books, you will love this show. It takes his essential characters, Jeeves, and Bertie and builds around them a typical Wodehouse story with odd twists and Jeeves ultimately saving the day. The show is performed with 3 actors (Bertie is always the same, but the other two play many characters). The play makes fun of the character changes and tends to break the plane of the audience. If you don't like that (and some don't) then don't go. But it is quite well done and the actors are excellent at donning the various characters. We laughed so hard my companion claimed she was sore afterwards.

Very enjoyable an Asset to the West End

This is not a standard play - with only 3 actors playing all the parts. I would have preferred a more standard set-up. Seating is very tight - zero leg room if you're over 5 foot tall. Overall, a little disappointing.

Fun and Games with Jeeves and Wooster

This is a must see 3 class acts putting on a great show. Looked liike they were enjoying it as much as the 700 people watching, would go again. Dance at the end was classic.

Reviewed on 22 February 2014 by Anonymous

A funny and original production of Jeeves and Wooster with only three actors. A superb farce.

Reviewed on 21 February 2014 by Anonymous

West End Enertainment at its Best

We wanted a good entertainging night out and we got it in spades with this preformance. It is amazing that so much can be achieved by only 3 actors. I find it hard to single anyone out but, for me, Matthew Macfadyen was brilliant in playing his 3 characters. My daughter (15) was in stitches and just loved it and she's difficult to please. I would heartily recommend it.

Reviewed on 08 February 2014 by Anonymous

Reviewed on 07 February 2014 by Anonymous

Reviewed on 12 January 2014 by Anonymous

Laughter from start to end - fantastic

Reviewed on 06 January 2014 by Anonymous

such great individual effort and virtuosity of all the THREE stars***

Reviewed on 22 December 2013 by Anonymous

Reviewed on 20 November 2013 by Anonymous

Reviewed on 15 November 2013 by Anonymous

Reviewed on 15 November 2013 by Anonymous

It is a narrative approach to one of the PG classic J&W adventures with a small number of actors and a lot of situational comic moments. Recommendable indeed.

Reviewed on 31 October 2013 by Anonymous